With the ASP World Championship Tour in full swing right now in the tropical perfection of Bali, watching the world’s best surfers via the live webcasts is a great way to spend a few hours… However, getting your head around the jargon and technical lingo that the commentators use can be a real challenge sometimes! 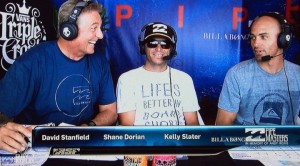 ASP commentators in the booth.

” Riding the Foam Ball “ : When a surfer is so far inside the barrel, they are riding on the white water under the lip of the wave.

” Combination Situation ” : A surfer needs to replace both of his wave scores with a combination of 2 higher ones to overtake their opponent.

” It’s Pumping!! ” : The waves are consistent and of high quality

” Ah, he came unstuck on that one!! “ : The surfer has just wiped out and not completed their manoeuvre.

” Priority “ : Surfers take it in turns to have the choice of any wave that they choose, without being challenged by their opponents.

” Look at him hanging out in the ‘green room’!! ” : When a surfer spends a long time inside the barrel.

” Chuckin’ Buckets!! “ : A large amount of spray is generated by a surfers turn.

” He went over the falls! “ : When a surfer falls from the top of the wave, with the breaking lip, into the flat water in front.

” the ASP “ : The Association of Surfing Professionals. The governing body for professional surfing.

” the ‘CT “ : An acronym for the World Championship Tour. The best 32 surfers competing in 10 events around the world to crown a World Champion.

” the ‘QS “ : An acronym for the World Qualifying Series. The lower tier tour made up of hundreds of surfers and multiple events around the globe, the top surfers from the end of the year get a place on the WCT for the following year.

Are there any terms that you’ve heard that baffle you? Post them in the comments section below and we can translate them for you!!