We’re all guilty of it at least once, putting all of our energy into a double arm paddle for that last burst of speed to push us over the edge. The last ditch effort to try and catch the wave we’re about to miss..

But does the double-paddle actually help our ability to catch waves? Or hinder it?
Let’s break it down..

Paddle speed is crucial when catching a wave, the faster you are traveling the less steep the wave has to be for you to catch it. That’s one of the reasons why you have to catch much steeper waves on a shortboard than you do on a longboard, because a shortboard will plane much slower across the water  than a longboard. When you are paddling with one arm after the other, you have a constant planing speed -which is what you need to catch a wave.

If you decide to do a double-paddle, your surfboard momentarily loses momentum as your arms leave the water, and is then jerked forward as both arms push, and then you slow again, and then jerk forward and so on and so on…So in effect, it actually slows you down. Meaning that you either come  off the back of the wave, or, get stuck up in the lip as the wave gets steeper and steeper. Either way, not what you want to happen. 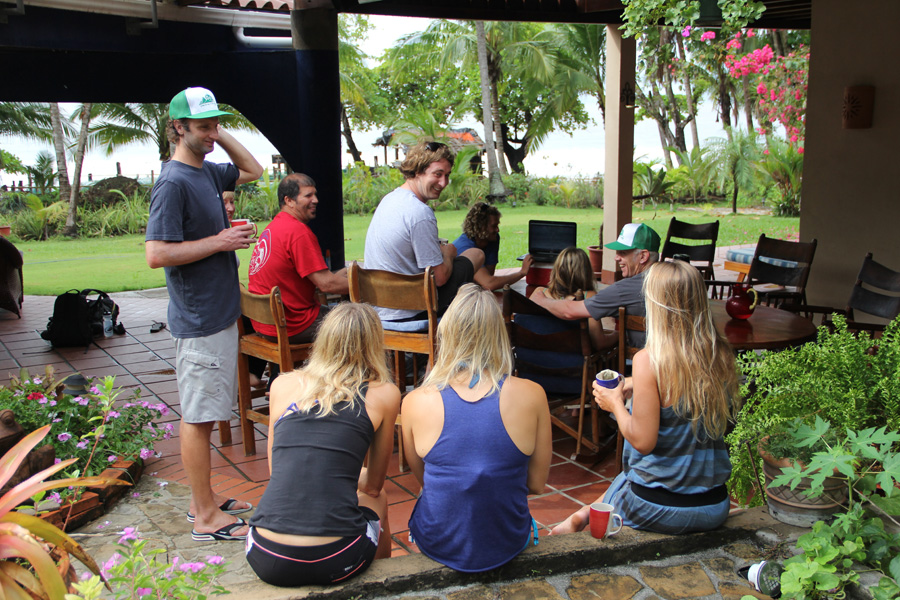 This isn’t as true for a longboard. Longboards have much more surface area, and a lower rocker than a shortboard. This means that during the moment where both arms leave the water before putting in a double-paddle, the board does not lose as much of it’s momentum, because it will keep planing more efficiently for longer. Regardless, the alternate arm paddle is still more effective.

Before a coaching session, I will ask the surfer what their immediate surfing goals are,  and more often than not, catching more waves is one of them.

Although there are lots of factors that go into increasing your wave count, avoiding the double paddle (especially if your a shortboarder) is something you can do to help. Most of the time surfers don’t even realize that they are doing it and it’s only during the post surf video analysis that they see that the double paddle is one of the reasons why they are missing a lot of their waves.

Next time your sitting out the back, play around with the two types of paddling. Do 10 alternate arm paddles, and consciously feel the constant momentum you generate. Then try 5 double-arm paddles, notice the start-stop motion, and how you cover less ground (with more effort).

Video analysis during our surf sessions is incredibly effective in revealing habits like these that really limit our wave catching potential. Many experienced surfers shy away from the idea of a coaching session but this kind of analysis could be instrumental in upping their surf game in a hurry.